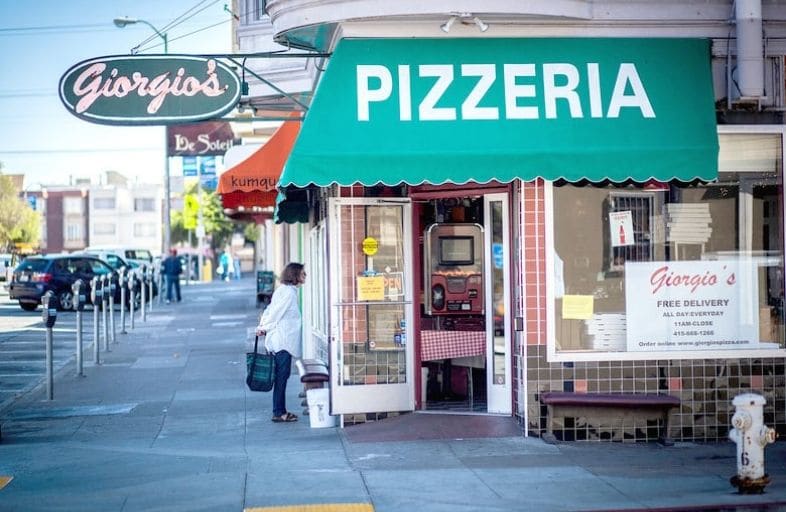 Giorgio’s Pizzeria was opened in the year 1972 at their first location on the corner of Clement and Third Avenue. The founder, Giorgio Anastasio, was born in Ischia which was has been credited as the birthplace of pizza. When the doors to Giorgio’s was open in 1972, it was known to serve pizza “just like New York.” Giorgio’s serves wholesome Italian comfort food mainly focused on their pizza. In 1978 Giorgio Anastasio decided that it was time for himself to move on, so he sold the business to two brothers Tony and Victor Contini. The two brothers wanted to keep the business exactly as Giorgio would have run it by keeping all the original recipes. Currently, the two brothers own the building at their Clement St location. In June 2013, Giorgio’s Pizzeria opened its second location in San Francisco’s Financial District, in the Crocker Galleria, at 50 Post Street. The Contini family continues to own, operate, and manage both Giorgio’s Pizzeria locations today, so they were our point of communication throughout the Case Study.

Giorgio’s remains an essential pillar of the community as it is one of the older business in the area. Although it has become an iconic stop for tourist to come and enjoy a slice of Italy when visiting in Clement, it does not have as many regulars as you would expect from an old business. This business has become a destination due to a significant portion of their customer base being tourists. The changing demographic of the neighborhood as also had a detrimental eﬀect on Giorgio’s regular clientele. Although this issue exists, it does not seem to aﬀect the overall health of the business as Giorgio’s is currently doing very well financially due to the consistent flow of tourist customer base.

When we walked into the Giorgio’s, we entered a restaurant that looked like it just opened in 1971. The decor of the restaurant has an old Italian aesthetic with red and white checkered table clothes. We were greeted by Tony Contini one of the brothers that own the pizzeria. The staﬀ was very friendly to all the customers that came in, and the open kitchen allowed people to observe the pizza being cooked. The overall interaction with Tony was very active it was very helpful in answering all the questions that we had. We did not get a chance to discuss details of the business due to it being lunchtime during the time that we walked in, but he provided us with his email where we were able to send him the questions for him to answer for us.

During our research on business in the area, we wandered into a specialty store called The Spanish Table who focus on bring Spanish culture to the area. The business had multiple stores open across California and was founded by a husband and wife team. The husband and wife ended up partnering with the “next generation” Andy and Tanya Booth for the past decade until Steve’s retirement in 2016 and ran the shops in California. We ended up talking to the manager of the store that told us the story and background of the business. This business was another rare case of a family owned business being transferred out of the family into another family similarly to how Giorgio passed on his business to Tony and Victor Contini. Although the manager of The Spanish Table told us that they didn’t see customers going from his specialty store to Giorgio’s, we disagree because they are in similar industries of providing a cultural experience to the customer. We believe that these businesses continue to diversify the neighborhood exposing people to cultures that they are not familiar with yet.

In addition to working well together, they are both a part of the Clement Street Merchants Association. Tony spoke about the importance of the association for all the small business in the neighborhood because it gives small businesses come together as one community. This association makes supporting each other it’s top priority.

Pizzerias in San Francisco has a broad range of quality from low-end pizza like Domino’s at 10 dollars for a large pizza and goes up to top notch pizza like Tony’s Pizza Napoletana that goes up to $50+ for a large pizza. Giorgio’s falls in between this scale at about $20 which is still expensive for a pizza for a lot of people. Fortunately for Giorgio’s the closest competition is Nazarrio’s pizza located on Geary and 4th. The price of Nazarrio’s pizza is around the same price as Giorgio’s which is helpful when justifying the price of their product. Pizza is the top selling product at Giorgio’s and is an industry that does not seem to be slowing down anytime soon. The growing demand for pizza options in the area might intrigue new pizzeria to enter the neighborhood potentially have a large eﬀect on the overall business because they will have growing pricing competition that might lower their overall margin per pizza.

Research done by the University of North Carolina shows us that, only 30 percent of all family-owned businesses survive into the second generation and only 12 percent will survive into the third generation. Surprisingly, only 3 percent of all family businesses operate at the fourth generation and beyond. Therefore, making it to the 4th generation is very rare. Giorgio’s beat the statistics by making it to the next generation. Giorgio’s is also unique as mentioned earlier they have survived a generational jump outside of the founder’s family. This is a tough task to complete due to the family being an integral part of the family business. After talking to Tony Contini, the current owner of Giorgio’s about these statistics he expressed that it was tough at first and almost didn’t think he would make it. He showed that the key to his successful transition was maintaining and growing on the founder’s ideas. He informed us that it was critical to build on the foundation rather than try to change it. Tony made it clear if a new owner is coming into an already established business it is detrimental for them to start changing key aspect because of the possible loss of the already established customer base. This was very insightful to us because it gave us a better understanding of the diﬃculties of transitioning from generation to generation.

One of the biggest problems that Giorgio’s is currently having is the changing demographic of the neighborhood. Recent surveys show that the average salary within the neighborhood has been increasing from $53,000 in 2015 to $61,000 2016. The rent has also been on the rise in the area causing the once customer base of Giorgio’s to leave the area and get replaced with a higher average wage. We also noticed that new businesses that were coming in like City + County and Kinship Salon. These firms’ customer base have higher salary averages and are looking for a higher level of service. This is impacting Giorgio’s overall business because they are losing the new customers coming into the neighborhood by lacking the change of time with the current trends. Without the adaptability of the restaurant with current trends, it will begin to hurt the business due to competition growth on Clement for this new customer base.

Giorgio’s is currently a destination business focusing on capturing outside customers. With the changing demographic in the area, this might begin to change the way Giorgio’s see the needs of their customers.

The average customer at Giorgio’s is not the same as it was 10-15 years ago. More millennials & customers who travel to the area, changing the “feel” of the restaurant. These new customers are expecting a more vibrant experience when going out to eat similarly to a successful restaurant on the same block Koja Kitchen which takes a new modern twist on Korean-Japanese food. To manage this changing client base, increase the businesses online/social media presence & update the companies technology. Currently, they do have social media account but don’t have a large following which does not provide an eﬃcient use of the marketing material they are currently producing. We recommend Giorgio’s to start to build their following so that they can create a clear communication channel with their customer base.

Giorgio’s is a destination business & many of the customers are college students. There is a large uncultured market share & the business doesn’t do anything to entice regulars. This lack of regulars lowers some customers consistency on a daily basis. Due to the growing change in the demographics of the neighborhood, we believe if Giorgio’s does not adjust with the growing trend change, they will continue to lose the new customers. We recommend making an eﬀort to connect with the new aspect of the neighborhood. Putting a focus on customer loyalty would benefit the businesses rapport & income.

Start with the basics to help people find your business online. Even with minimal upkeep, you can grow your visibility. Sign up to get the checklist.